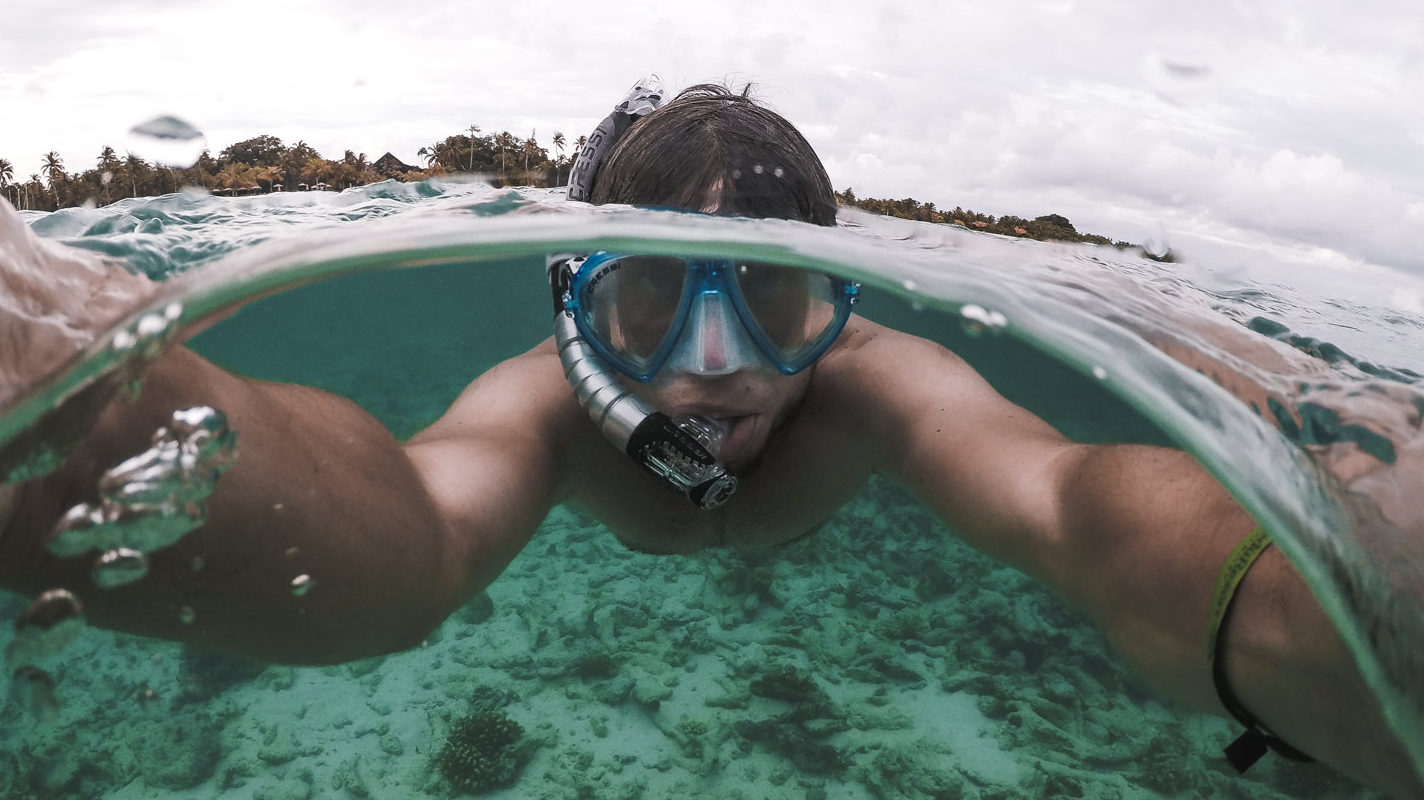 7 Tips to Shoot Stunning Pictures With a Dome Port

Half-in and half-out of the water. I’m sure you know such photos. A girl in a bikini that dives a few feet underwater like an innocent and beautiful mermaid. And above the water level sunshine and palm trees. Photos of this type have been spreading rapidly on social networks in recent years. And they have success. Similar to drone photos. It offers a new way of story telling, a new point of view. But … How are these cool shots taken?

Hardly, haha! Plus it needs the right equipment, a little exercise and a lot of patience. Right from the start, let’s just say the main thing – you need special accessories. The so-called dome port. It is actually an underwater housing for your action camera. There are 2 types of ports – flat ports and dome ports. The differences are obvious – one is a flat window, and the other is shaped like a dome. And this type of port we care about. Yes, this article is mainly about taking pictures with the dome port, but you can also take it as a best underwater photography tips for beginners.

How does Dome Port work?

It’s actually simple. The trick is that the curved port creates space between the action camera (lens) and water, which allows half-in and half-out of the water photos. The fact is that you could achieve the same effect by using a glass bowl or a round fishbowl. And of course, the dome port can also be purchased for your SLR camera, but in that case you will pay a few hundred dollars more (compared to the price for the action camera version).

So in theory, using a port is easy – just insert a camera inside and that’s it. But the practice is much more complicated. Do not take just random photos, try to think in advance what you would like to shoot. Realize that you will often not have firm ground under your feet. So taking a photo sharply can be a problem. Despite the fact that keeping the right composition can be also difficult (you see almost nothing on the small action camera screen). At the same time, be careful not to spray the top of the dome port with water – water drops could ruin your photos. So… Keep it dry! 🙂 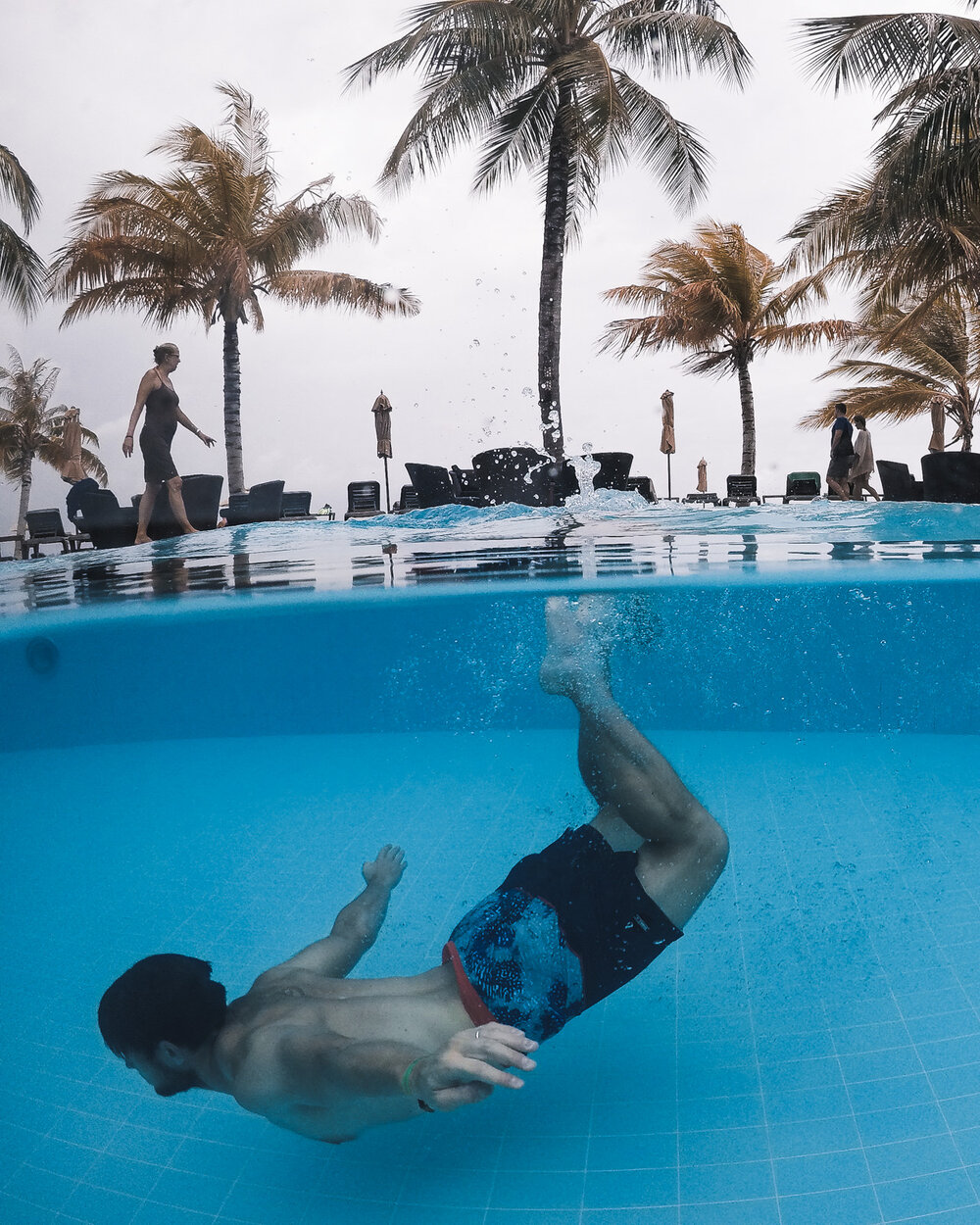 One very important tip first – always use anti-fog strips! The point is that if water gets inside the dome port (even a few drops), then this plastic dome will fog up. And you can’t take pictures with that. You have to prevent this. For example, you can buy these anti-fog inserts for just a few dollars here. Don’t worry – they can be used several times. Just put two of these inserts on the sides of the action camera, close the dome port and that’s it. Don’t underestimate it and get it!

I guess now you have a pretty good idea of what it is like to take pictures with the dome port. It is a challenge. Moreover, it is virtually impossible to take pictures of yourself. The big advantage is when two people participate in the photo shoot. One makes a model (—> diving for example) and the other takes pictures. It is also good to remember that you have to be very close to the subject / person you are shooting because you will be taking pictures at wide angle. It is also wise to set everything on the camera beforehand, because once you put it inside the dome port and swim in the water, it will be difficult to change the settings 🙂

Should I use Red filter?

You may know that a red filter is often used for underwater photography to correct colors. In my experience, however, not very beneficial in the case of taking pictures with the dome port. Let’s not forget that only about half of the photo will be under water. And while adding a red through the filter adds vividness to an underwater photo, it may not work well with the other part of the photo above the water. Plus, you can change colors and temperature later in the post process through Adobe Lightroom or Photoshop. The result will be virtually the same if you are shooting to RAW. 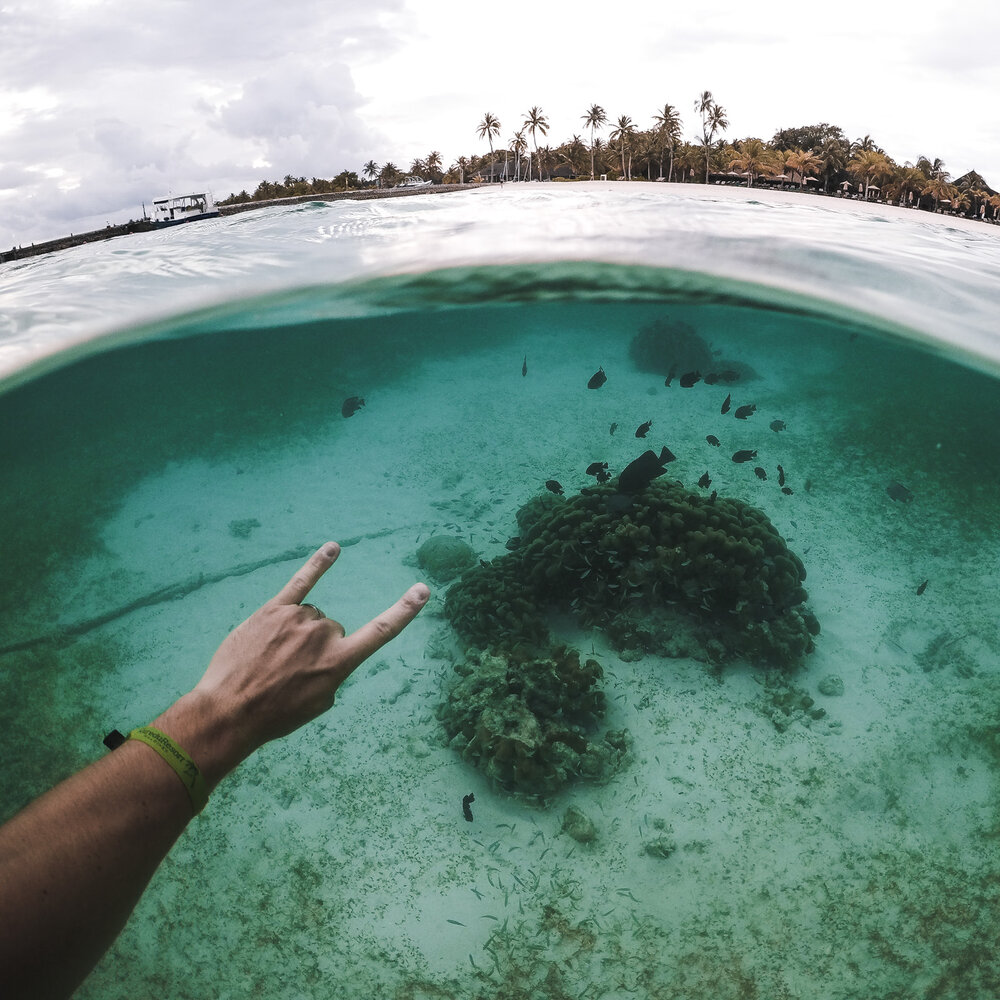 What type of dome port do I use?

I use Telesin dome port. You can get it for about 44 Euro (including accessories such as trigger, floating handle…). It is compatible with cameras GoPro 5 and later (I use GoPro 2018). There are many more similar ports on the market, but I chose this because of the many positive reviews and good price / performance ratio. It didn’t disappoint me.

I would like to point out that I am a beginner when it comes to taking pictures with a dome port. Actually, I have only used it on two holidays so far (Maldives and Egypt). And I used the cheapest GoPro camera that doesn’t even know RAW format, haha. At the same time, I was always practically alone to take pictures. However, as a fan of photography in general, I was surprised how photo shooting of this type can be fun and creative at the same time. Believe me, if you own an action camera, those few Euros will pay off for this fun 🙂

Best 7 tips for taking pictures with the dome port: