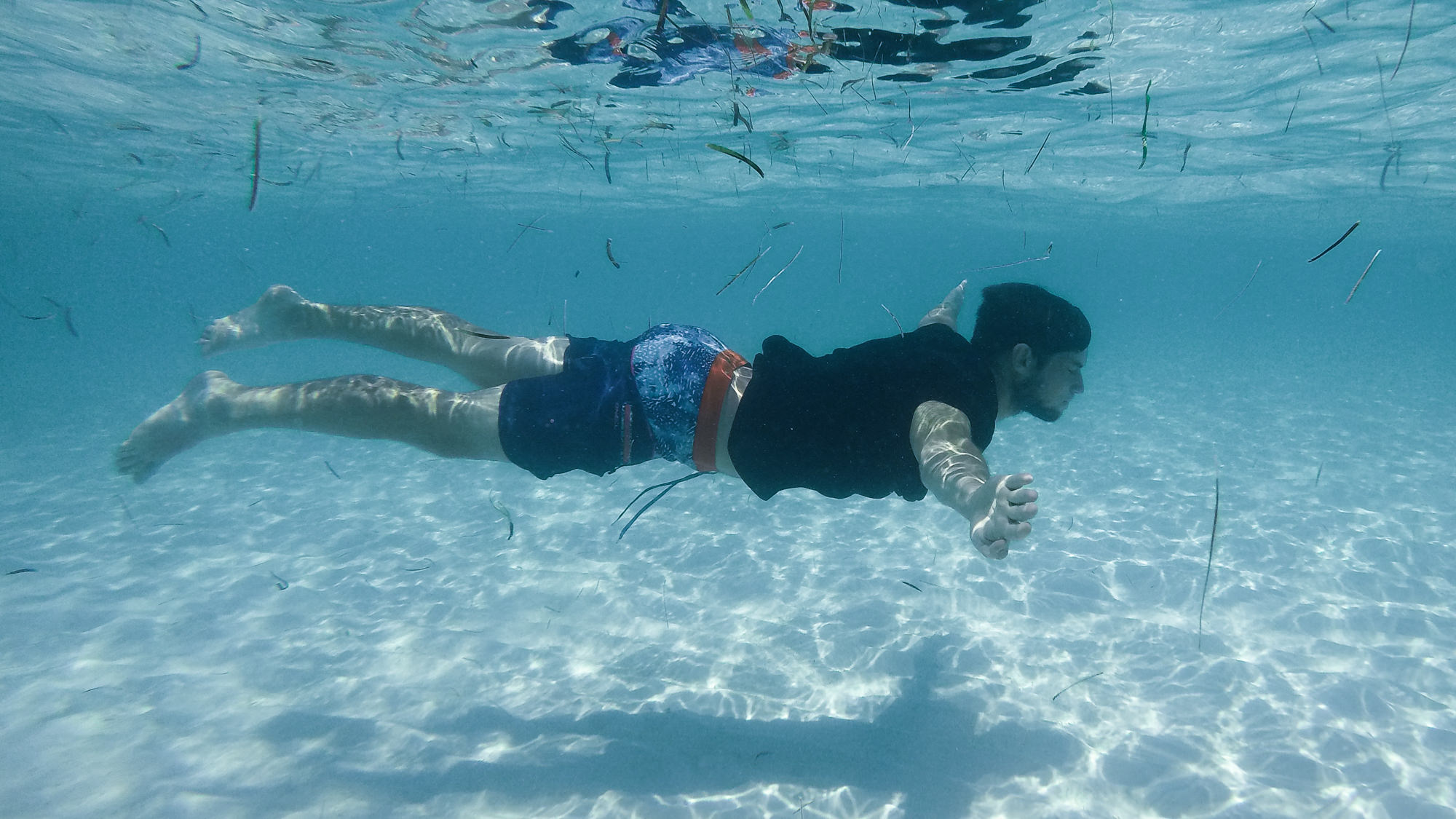 Best GoPro Accessories for Travel You Can Get in 2020

The very first GoPro action camera was released in 2006. Its resolution was only 320 x 240px, funny! Over the past 13 years, founder Nick Woodman had enough time to make these cameras just perfect. GoPro started out as a simple idea – the goal was to build a mini camera for filming a travel experience. And now the GoPro company is a giant with a revenue of more than $ 1 billion a year.

The Best GoPro Accessories of All Time (Compatible 5 – 8)

I know, it’s just a handler, but if you use GoPro in the water, it is an absolute must-have. This floating handler will “extend” your hand and thanks to the wrist strap you won’t lose your GoPro. And with the quick release base, you can switch between any mounts easily. If water is your good friend, this is the best choice for any seadog.

Speaking of water, we must not forget the amazing dome port – because of the half-in and half-out of the water shots (or so-called split shots). It’s one of my favorite photo toys! For best results you will also need anti-fog inserts and a red filter. But I have already written the article ‘7 Tips to Shoot Stunning Pictures with a Dome Port‘ about dome port and underwater photography in general. So please check it out!

Ha! I had to. Unfortunately, I don’t have a dog. But if I had one, this would be my number one choice! Wouldn’t you like to see the action shots of your dog chasing deer in the forest? How does he play in the water or play fetch? There are two mounting points (back and chest). Don’t worry about your dog size or breed, it will fit any. Those few bucks are definitely worth the unique footage, ain’t they?

This is a very useful and fully adjustable GoPro mount. Thanks to this mount, you can use GoPro in many sports activities from a first-person perspective. It doesn’t matter if you are cycling, climbing mountains or snowboarding. You simply attach it to your helmet or directly to your head. Just perfect for sports activities.

If you need a tripod for any purpose, you won’t find a better one. This one is exceptional in its scalability. You can wrap it around a tree! This tripod is not only for your GoPro you can also mount a DSLR or a mobile phone. Plus you get a wireless remote control (for iOS and Android)! The tripod load-capacity is 1 kg. It is made of quality materials, so it is durable. For a normal family holiday it isn’t probably the right choice, but in challenging terrain and with a certain amount of creativity is invaluable.

This handle extends your hand range by up to 97 cm! Additionally, there is an integrated ball-and-socket at the end that allows you to make further adjustments or swivel your GoPro 360° (just like on tripods). Yeah, this toy belongs to the more expensive accessories, but remember, if you want to get yourself into the frame, you need it (not to mention less distortion of perspective). Perfect for selfies & vlogging!

In my opinion, the best all-in-one GoPro Kit, you can find on the market. Including two of the most useful accessories, I’ve already written about. Floating Hand Grip and Head Strap with Quick Clip. And you get a nice case. Yes, this set is much cheaper than buying these accessories separately. You get versatile equipment for sports and water activities in one shot. Hell yeah!

GoPro Battery lasts less than 2 hours. If you’re planning a longer trip or shooting a really sophisticated video a spare battery is more than necessary. With this dual charger, you can charge them both at once. Saving money is fine, but if your GoPro doesn’t have the juice, it’s useless. What would I gave for a spare battery when I was in the Maldives … 🙂

Almost every GoPro now shoots videos in 4k (except Gopro Hero 2018). Therefore, it is necessary to use SD cards with a fast write speed. And because 4K videos take up a lot of disk space, you need to have at least 64GB (better 128GB). In addition, with this type of SD card (Extreme) you can be sure that it can withstand almost anything (temperature-proof, water-proof, shock-proof and x-ray proof). You don’t want your precious effort to get lost, do you?

GoPro 8 comes also with accessories designed specifically for professionals. I mean those who are really serious about film. These accessories are not supported by any older versions of GoPro. So if you don’t have GoPro 8 or don’t have the intention of buying it, you can just ignore this section…… or you might want to hear a reason why to get one. 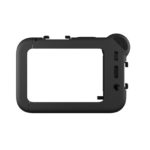 An absolutely new type of housing. It allows you to connect an external screen, microphone or lights to your GoPro. This Media Mod already has an internal directional microphone and it must be acknowledged that this microphone is great (=> much clearer sound). Yes, this housing is essential if you want to take your GoPro to a new level.

You aren’t vlogger yet? An external flip-up screen that lets you see yourself while shooting. This screen is 2 inches large and foldable. But you need Media Mod to connect it to your GoPro camera. Let’s be honest – it’s not a cheap thing, but if vlogging is your daily bread, it’s worth it.

An external LED lighting that can be connected to GoPro, again, via Media Mod. Offering 4 light levels ranging from 20 to 200 lumens. This GoPro Light lasts up to 6 hours and color temperature without a diffuser is around 5000K. It’s simple – more light usually means better video quality. For a given price it is relatively high quality and powerful lighting in a compact version. So if you decide to use Media Mod, take Light Mod as well.

Currently GoPro modules are out of stock on Amazon. When available, I will add links …

The core function of all GoPro cameras stayed the same even today (except 360 GoPro Max and GoPro Fusion). Small, reliable and durable action cameras. They are waterproof down to 10m without housing. They respond to voice commands and have perfect image stabilization. Yet there are substantial differences between some of them. Especially if you’re interested in taking pictures or slow-motion video. Let’s talk more about each version below.

In my opinion, the best choice. But is it worth upgrading from GoPro 7? If you’re not going to buy Media Mod and other upgrades, definitely not. Yes, there are some improvements – especially when it comes to image stabilization. With GoPro8 it is possible to enable stabilization in all shooting modes, even at 1080p at 240fps. Which can be a huge benefit for someone who often makes slow-motion videos. At the same time, GoPro 8 offers preloaded presets (for Standard, Activity, Cinematic and Slow Motion shots) and you can even create your own presets. It may seem like a little thing, but it is not – it saves a lot of time (you do not have to adjust everything over and over). The main strength of this model is the possibility of using the additional modules described above. Only with them GoPro 8 makes sense (compared to GoPro 7 of course).

If you don’t want to spend too much money on an action camera and you already know that buying modules won’t interest you (for example, you only need high-quality travel videos) then GoPro 7 is a better choice. In terms of price-performance, GoPro 7 is almost unbeatable. The cameras are almost identical, so you will save about $ 100. Believe me, GoPro 7 is more than the perfect version of the camera for general purposes. On the other hand, a DJI Osmo Action camera comes at a similar price. This new camera from the world’s most famous drone manufacturer is very similar in performance, but has an extra screen, making it a very suitable tool for vlogging.

GoPro Hero 2018 is an option if you want a decent action camera as cheaply as possible. Or if you know you will use it only exceptionally – this was exactly my case. I bought it only to film and take pictures of the underwater sea-world while snorkeling. But this basic version has fundamental problems – it can’t shoot in 4K, it can’t shoot in RAW format. Want slow motion videos? Unlucky you, the camera can do a maximum of 60 frames per second in Full HD. On the other hand – it is waterproof up to 10m, has voice control and image quality or video stabilization is good (as in GoPro 5 Black). GoPro Hero 2018 doesn’t cost even half what GoPro 7 Black does. Tempting? Yes, but it is not suitable for more serious filming.

GoPro Max is a virtually new version of the GoPro Fusion camera – a 360-degree camera, thanks to which you get everything in the frame. It is slightly more expensive than GoPro 8, but you get two lenses instead of one. And unbelievable 6 microphones for surround sound (360 audio). The old GoPro Fusion camera had the problem of not having a digital screen. Fortunately, that is no longer the problem. Moreover, GoPro Max comes in a smaller size! Developers also took care of the mobile application Reframe, where you can edit videos at will (and especially simply). So, this all sounds very nice, doesn’t it? But the problem is that 6k resolution (exactly 5.6k) may not be enough for everyone (remember that all of those pixels are spread all across the spherical area and you will always crop a lot. Even though not everyone of us needs to record and edit such videos. Yes, these cameras target a narrow group of people – professionals or hardcore athletes. But I will tell you one thing – if you can make the most of what this camera offers, you will be able to make unique videos.

As far as shooting with a GoPro camera, I am not one of the most experienced. Still, I can tell you what has paid off over the 2 years since I own the action camera.