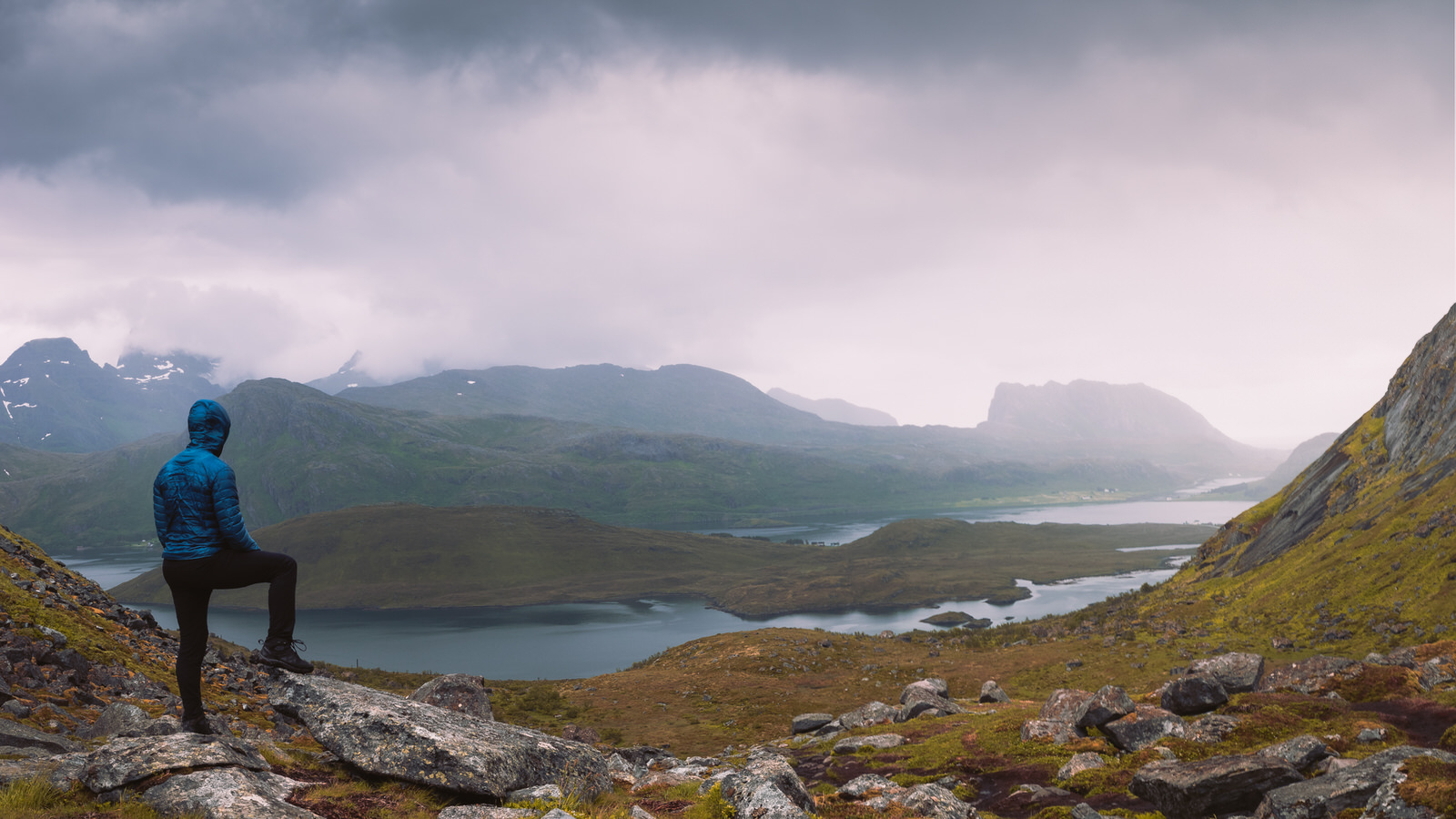 One would definitely find many more good outdoor movies than I listed below. However, I chose films that have somehow grown close to my heart. At the same time, I tried to make the selection varied in terms of environment and genre. Most of them are based on real events. I know – it’s a popular Hollywood buzzword that has nothing to do with reality. However, this is not the case. But beware! The desire to travel and experience adventure dangerously increases after watching these movies! 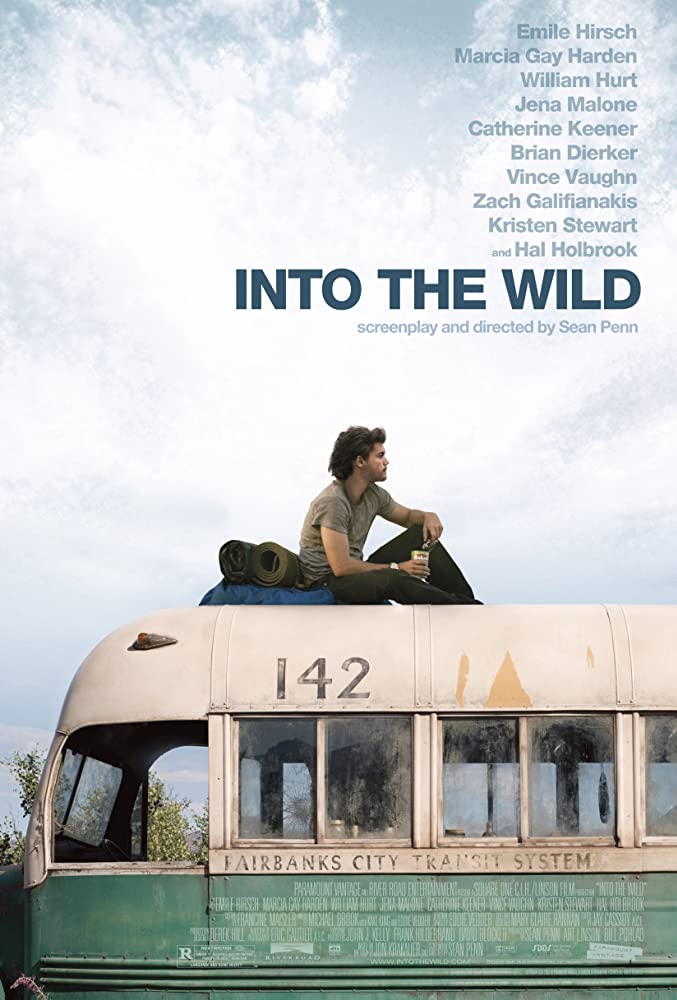 This impressive film is one of my most favorite movies ever. It tells the story of a young man and intellectual Christopher McCandless (staring Emile Hirsch). Christopher, after studies, decides to free himself from materialistic things such as a car or money and sets out on a long journey through the wilderness – only on his own to Alaska. Which he does, but as you probably know, his adventure doesn’t have a happy ending. He died of starvation in an old bus, which serves as a residence for hunters and foresters in Alaska. He weighed 30 kg when they found him. A few days before that happened, he managed to take a famous selfie by the bus. I admit that this film is not for everyone – it has a slower tempo and a bit of a philosophical touch, but its rawness, authenticity, and the perfect soundtrack by Eddie Vedder makes it an unforgettable experience that most of you will fall in love with. Plus, it’s based on a true story! Yeah, and young Kristen Stewart (16 years old) is also staring here 🙂

The most picturesque landscape on earth? Try Lofoten in Norway! 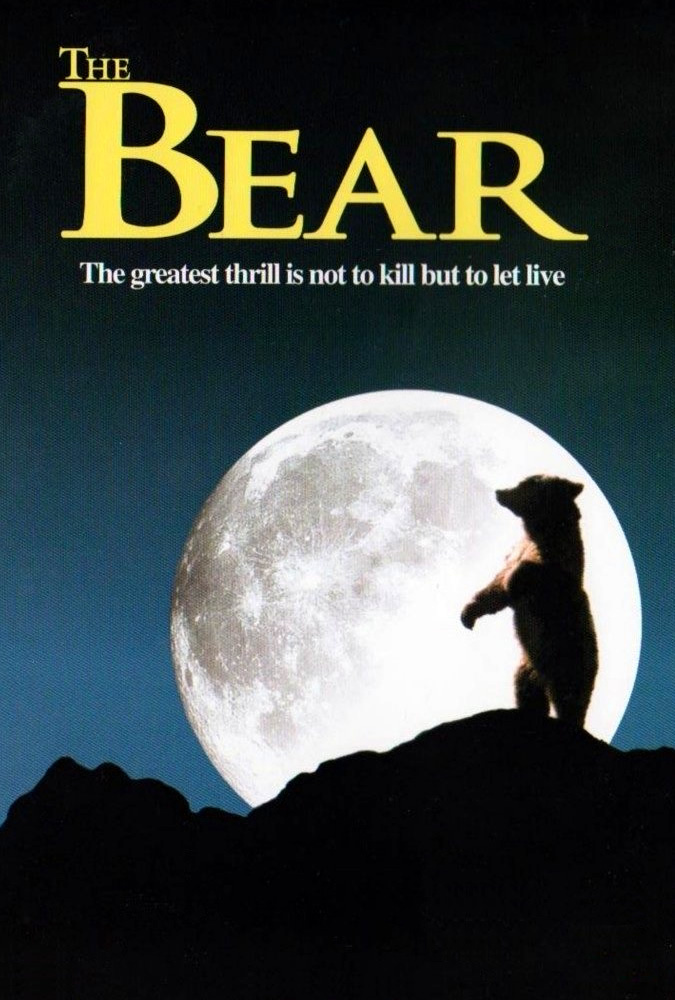 I bet a few of you have heard of this film. It is an older film from 1988, but it is completely unique. It tells the story of a young bear cub, which lost its mother. Coincidentally, he encounters an adult grizzly bear, which was shot by local hunters. An extraordinary and touching friendship develops between them. Unfortunately, greedy hunters are still on their trail … Beware, this is not a Hollywood animated fairy tale for children. It’s a rough story from the wilderness, where real bears play a major role. This was filmed in the Italian Dolomites at an altitude of about 2,500 meters above sea level. There are almost no dialogs in the film and the plot could be summed up in two sentences. However, what the famous French director Jean-Jacques Annaud (The Name of the Rose) managed to shoot in real nature with real bears will take your breath away. It is simply a unique story. The film won many awards and was nominated for an Oscar. A must-watch for every nature lover. 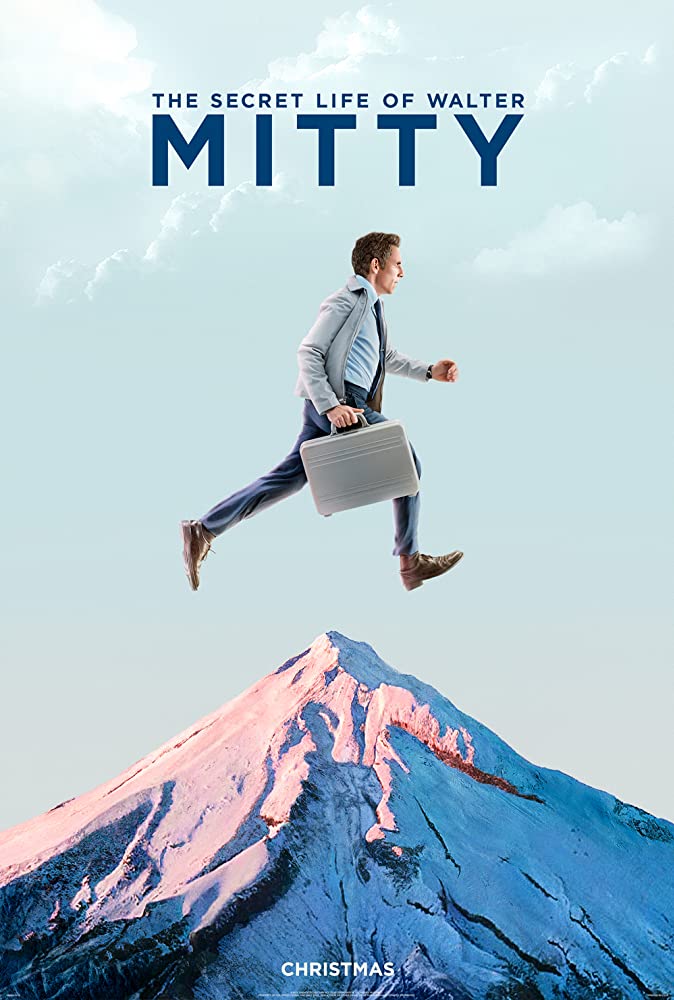 The Secret Life of Walter Mitty

Sometimes it’s a desire to look at something less serious, isn’t it? This comedy by Ben Stiller is exactly what you’re looking for. Lots of travel, lots of fun and a little thought. All in one beautiful, modern, and big-budget concept. The film tells the story of a photo editor of Life magazine (Ben Stiller). He gets tasked with finding the missing negative of the photo, which must be on the cover of the latest issue of the magazine. In order to find this negative, he must first find a world-famous photographer who moves around the world in the most remote places. What does it mean? This photo editor has to travel half the world. The second problem is that he is a dreamer and lives a very stereotypical life. Which is the complete opposite of how this mysterious photographer lives. A stunning plot, what do you say? You will see Greenland, Iceland or the Himilayas. You will experience the eruption of a volcano and much more. I can’t say that this is an exceptional film, but you won’t find many alternatives where the genre of comedy is combined with travel so nicely and cleverly. 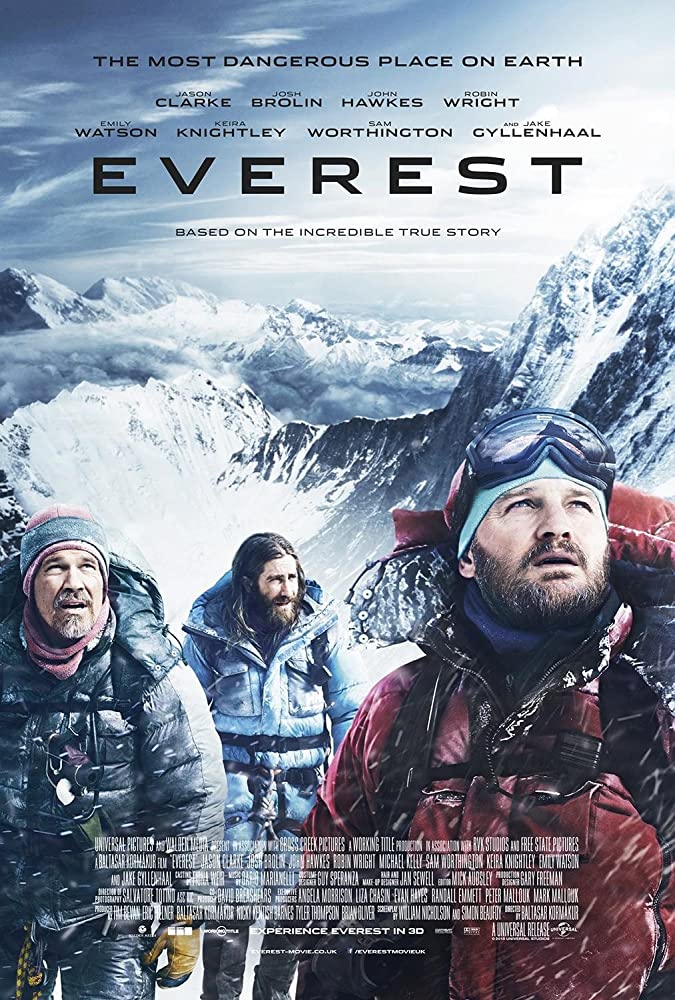 This 2015 film is the latest of all. Surprisingly, I saw it recently – and I was so excited! It was created as part of a big-budget Hollywood production and is interesting in many ways. This is not a fictional action spectacle, as we would expect from Hollywood. It is a reconstruction of the story of an expedition from 1996, which ended tragically. The emphasis is on maximum authenticity (even dialogues are often authentic because they have been recorded). The start is slower, but then comes a brutal hour of adventure, where you will hold your breath. The incredibly demanding shooting took place in the Himalayas at an altitude of 4200 m. Thanks to a solid budget, the authentic scenes combined with tricks are absolutely famous. A great and true story that is a must for all mountain lovers. The icing on the cake? The film is full of Hollywood stars – Jake Gyllenhaal, Sam Worthington, Keira Knightley, Emily Watson …

Do you love the mountains but don’t want any extreme hike? Definitely the Alps in Austria! 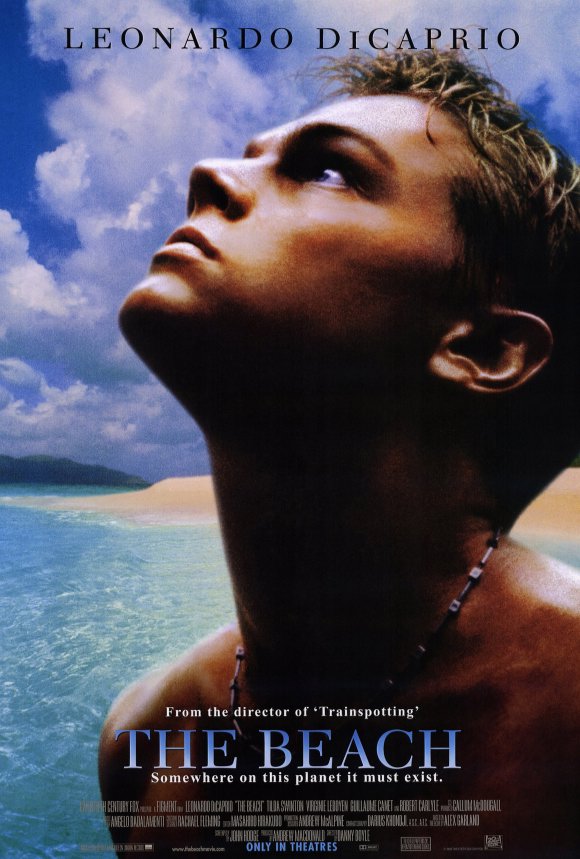 Yes, most of you probably know this story from Thailand. This is one of the first big Hollywood films with Leonard DiCaprio and the director is the famous Danny Boyle (Trainspotting, Slumdog Millionaire …).  This movie is based on a novel by Alex Garland from 1996. Leo plays an American who, when traveling in Thailand, accidentally gets to the map to a secret beach, which is supposed to be incredibly beautiful. The film does not follow the original novel, but this doesn’t matter. It’s an audiovisual bomb (as usual with this director). And believe me, you will definitely download the soundtrack after watching the film. It was filmed on Hat Maya Beach on the Thai island of Phi Phi Leh. This island is accessible by ferry from Phuket or Krabi Island. The only problem with the Beach is that the final third of the film is … Messy. It doesn’t fit very well into the film and practically changes the genre.

Are you looking for the perfect beach? Forget tourist Thailand – try the Maldives! 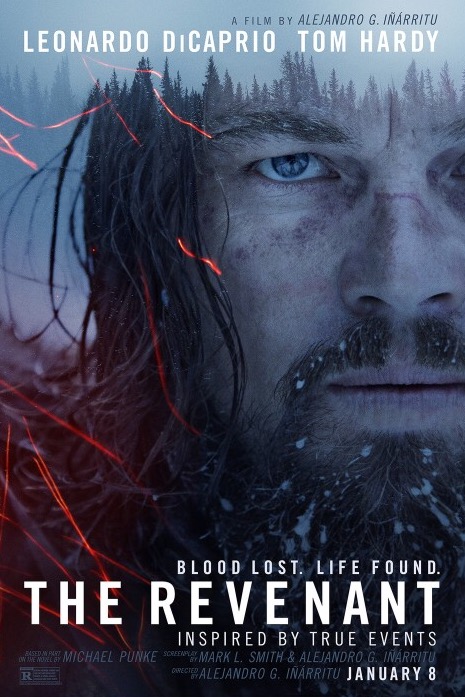 Leonardo DiCaprio and Tom Hardy. I’ve always wanted to see these megastars in one movie. My wish came true when Revenant was released. And not only that – you won’t find any other Hollywood film where there are so many divine scenes from the wilderness together. This is a 2 and a half-hour long monstrosity that has no competition. The purely naturalistic rawness and authenticity of the environment. It was filmed in many virgin places in Canada. The budget exceeded $ 130 million! But most importantly, a perfect film was made, for which Leo received his first Oscar. And again – this is a film that is inspired by real events. Here, Leo plays the character of Hugh Glass, who was attacked in the 18th century by a bear, which practically tore him to pieces. It is unbelievable that this man, thanks to his tenacity, experience, and luck, survived and died 10 years after this incident. This movie is a miracle. Honest hard work that works in every way. Masterpiece. The creator is the famous Spanish director Alejandro González Iñárritu (Amores Perros, Babel …). 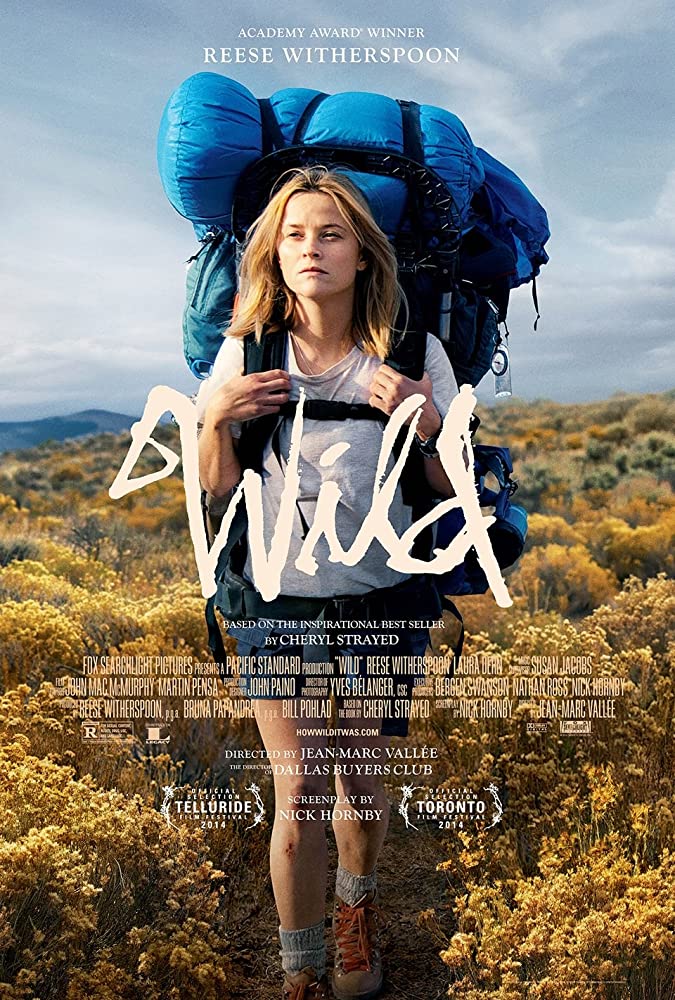 A film a bit like Into The Wild, just with a woman in the lead role. The film tells the true story of Cheryl Strayed (Reese Witherspoon), who one day decided to try the Pacific Crest Trail. Which is the longest and most difficult trail in Americ, leading from the Mojave Desert through California and Oregon to Washington state. This is an 1170 km long alpine route! Why? To clear her head. The trip was taken by Cheryl Strayed in 1995 and it only took her 94 days! Try to beat it, haha! Reese Witherspoon was even nominated for an Oscar for her performance in this film. If you don’t indulge in naturalism in movies and don’t need any extreme tension, this is the movie for you. As a gem, I would add that the director refused to give Reese Witherspoon instructions on setting up the tent – he wanted the frustration of not being able to set it up to look as realistic as possible.

The Czech Republic is not just Prague. We also have areas where you will come across almost untouched nature – take a look at the Bohemian Forest!